I am a Victim , this is my story and I believe there are millions like me.

It was in 2003 I first came in contact with a group of people recruited by a church based in Andhra Pradesh to convert Hindus of Kerala (They have achieved Goal as many converted ). When Mr. X (A converted Andhra Hindu ) approached me and started giving lectures about Gods love and rewards for loving God . I didn’t find any problems like any other secular Hindu. Soon when he realized that I am a keen listener, he gifted me a Bible.

I asked him “This is a an English Bible with high quality printing where do you get all the money to distribute such expensive book for free”.

When he told me to accept Jesus as God , I asked him whats the problem with Vishnu and Ram? 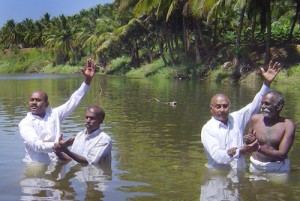 I looked around and kept quite seeking the definition of secularism.
“Those who don’t accept Jesus are sinners and deserve hell”
He shattered my secular brain by crossing even limits further.
“Mahatma Gandhi ( These days writing “Gandhi ” alone create lot of confusion ) and Abdul Kalam???” He thought for a while and he reserved berths of hell for them too.

I calculated in mind about my destiny ,landed in total confusion- Hell for Mahatma Gandhi , Abdul Kalam and Swami Vivekananda ??? I couldn’t stop laughing in my mind when I selected Hell in few seconds .

“Do you visit other religious community homes to say that their God is not God ? “

I was keen to know.

“No No, they react violently so we avoid such people”

Fist time I felt ashamed of being a non violent Hindu.

Finally I asked him if I could sent him a Bhagvath Geetha , he refused because his church has restricted him from reading other religious texts. After long debate he started confessing to me , how the church forcefully sent him to do 6 months job. He is paid well for his 6 months job, He said he will stop this activity as long as 6 months gets completed. He accepted that Insulting other religions is not good since he is a learned man ( he was post graduate ).

Since then I started my job against conversion mafia led by Church:)

The reason for writing this now is that because many of my friends complained that they started receiving emails from such Church based organizations as soon as they registered for ADHAAR card.

” I suppose, true of the other great faiths of the world, only it is held that it is specially so in the case of Hinduism. But here comes the point I am labouring to reach. If there is any substance in what I have said, will not the great missionary bodies of India, to whom she owes a deep debt of gratitude for what they have done and are doing, do still better and serve the spirit of Christianity better by dropping the goal of proselytizing while continuing their philanthropic work?”